Okay, I’m gonna be honest with you. Since starting this list I actually played another game that I couldn’t not add to it, so I’m just gonna cheat a little bit! My top ten list now has 11 games. Deal with it. 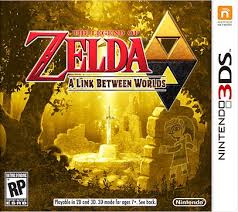 I kind of got a late start when it came to gaming. My first console was a Nintendo 64, (though I did technically own an Atari 2600 before that, even though half our games didn’t work) and the first game I ever played on it was Ocarina of Time. I fully credit that game as the one that began my interest and obsession with video games, and the Zelda franchise has held a very special place in my heart ever since.

A Link To The Past lives in my memory as one of the greatest experiences in one of my favourite franchises in my now long history of gaming. When Nintendo announced a direct sequel, I was skeptical. Their last entry in the series, Skyward Sword, didn’t exactly blow me away (it was fucking awful) and I feared for my beloved classic. Then they said you could turn 2D and walk around on walls, and I was ready to stop paying attention. I am very glad I didn’t.

A Link Between Worlds takes everything that was great about A Link To The Past and makes it better. The world is just familiar enough to tickle nostalgia without feeling like it’s retreading old ground, the puzzles are fresh, clever and wonderfully accessible (without sacrificing complexity) and the music is, frankly, adorable. The game treats you like a Zelda veteran, not wasting your time or holding your hand, and mixing up the formula just enough to feel different without taking away what you love. I pretty much couldn’t stop smiling the whole time I was playing.

Let’s be honest here. Pokemon has been stale for a long time now. Now, I’ve played every single core game since the beginning, watched the anime, played the TCG, memorised the Pokemon rap. I’m a Pokemon fangirl if ever there was one, but since Diamond and Pearl, I have been increasingly underwhelmed with what the franchise has to offer. I was starting to worry that I’d outgrown it when X and Y came out.

Seeing old and new Pokemon in 3D, with full sets of animation, was satisfying in a way I thought Pokemon had lost the ability to offer. Being able to choose a skin tone, change outfits, play with Pokemon like fucking Nintendogs, all made me happy like Pokemon hasn’t managed in a long, long time. Clever updates to the battle system, to catching Pokemon, to training and raising them, make it feel like a game designed for a modern audience, one who is sick of the same old crap. The social features are genius – any game that can actually get me to willingly interact with social elements of itself has achieved something pretty impressive, and Pokemon X and Y hit that side of things right out of the park.

Most importantly, X and Y made me feel excited about Pokemon again. They brought back the magic of my childhood, reminded me of just how much I’ve enjoyed playing those games throughout my life.

For one thing, The Last of Us manages story and storytelling in a way that puts most other games to shame. It’s a powerfully cinematic experience with a dark, engaging story that I pretty much had to see to the end, regardless of how little I enjoyed the game’s mechanics. And I did not enjoy the game’s mechanics.

The Last of Us was never fun. A lot of the time, I felt like the game was actively working to make me enjoy it less. I didn’t care. I wanted to know what happened next, wanted to help the characters succeed, survive, just to make it through whatever shitty situation they found themselves in.

The reason this game is so high up my list is because I enjoyed it so much despite disliking so many elements about it. It did the things that I care about well enough that I didn’t care about the things it didn’t do well, and it got me to engage with a genre I typically try to avoid.

Saint’s Row IV might be one of the most gleefully stupid yet overwhelmingly enjoyable games I’ve ever played. Very few video games manage to pull of comedy, fewer still manage it consistently, but Saint’s Row had me laughing pretty much the entire way through. That’s not hyperbole, I really did spend the vast majority of this game laughing.

Just as importantly, Saint’s Row IV is a lot of fun to play. It takes away every possible barrier between you and whatever stupid thing you want to do next, and just throws toys at you to mess around with. Instead of working to keep up with the game’s difficulty, it almost feels like the game has to work to keep up with you, which is every bit as satisfying and not nearly as frustrating.

It’s a game full of surprisingly endearing characters, a bizarre and vibrant world, and whilst I wouldn’t pin it up as an example of great representative media, it does a hell of a lot better with its depictions of gender and race than it’s much beloved counterpart, Grand Theft Auto. My lady Saint was treated with as much respect and given as much bad-assery as any male protagonist, whilst this years GTA entry managed a whole three protagonists and not one woman.

Saint’s Row IV is reckless, stupid fun, and one of the best video game experiences I’ve had this year.

This is my bonus entry I mentioned above, and you can probably see why I didn’t want to leave it out considering it’s earned my number 2 spot.

Unfortunately, it’s kind of difficult to describe what it is, exactly. Mechanically, it’s essentially an exploration game that encourages you to mess with every possible variable just to see how it changes the story. Thematically, it’s a brilliant meta-commentary on video game design, construction, marketing and the communities around them.

You’ll play through the same scenario easily a dozen times; Stanley, whose job it is to press buttons on his computer, stops being told which buttons to press, and leaves his office to find the building empty. Guided by a narrator, you wander through the halls, trying to find out what happened to everyone… sort of. Sometimes that’s what you do. It’s hard to describe without spoiling anything, but rest assured that The Stanley Parable is incredibly witty, full of variety and a very unique gaming experience.

And here we are at the end. My game of 2013. It was’t the best looking, or the most fun, or the most engaging experience. Actually, it wasn’t the best in any category. But it was the experience that meant the most to me, and moved me the most.

Gone Home is essentially a two hour game that has you exploring your old family home, though your family themselves are all absent for one reason or another. As you explore, you find notes left to you, or visual clues and indications of what has been happening in your absence. Bit by bit, a story starts to unfold, and it’s not your story. It’s your sisters. You’re a helpless spectator as she comes to terms with her sexuality, and her parents, your parents, don’t. You walk through this empty house and see evidence of a marriage falling apart and a teenage girl struggling against parents who refuse to accept their daughter for the person she is.

It’s a powerful, personal story and though relatively simple, there’s a beauty and honesty to it that you rarely find in any storytelling medium, least of all video games. I connected with the story more closely than any other, and felt more strongly about those characters than any others. Despite never seeing more than a photograph or two, just through her voice, her handwriting, the state of her room, I felt as if it could easily have been my own sister, as real a person as could possibly be made in the space of two hours.

That, and it’s a video game that involves no shooting or violence of any kind, with a female protagonist, focused purely on story, about lesbians. What else could I possibly want?

Hi, my name is Snow and I like to make things up.

View all posts by Snow→